In the past I have written a couple of articles on how to run Windows applications using SeamlessRDP and Sun xVM (Virtualbox) and [Linux KVM](http://www.linux-kvm.org/page/Main_Page Linux KVM) (Kernel-based Virtual Machine). After reviewing both articles I have decided to write a new article encompassing both hypervisors and correcting some of the mistakes I have found as well improvements made by a couple of guys who have done quite a deal of testing: Thomas Hansson and Peter Clarén.

By the way – There is no reason why this guide should not work on other platforms like FreeBSD (Virtualbox, Qemu), Mac OSX (Virtualbox) or Solaris/OpenSolaris (Virtualbox) as long as the host platform is x86 or x64. The guide is centered around Ubuntu but it should be possible to use it for other Linux distributions without much work.

So, what is the reason for this article?#

I run Linux on my primary machine (well, on all my machines really) but there are a few Windows application I need to run – Some run under Wine but does not act like in native Windows, some will not run under Wine. The solution was to run a virtual machine with Windows but I did not like the fact that I had to have a complete Windows desktop.

Enter SeamlessRDP. SeamlessRDP is an “extension” of the RDP protocol (originally developed by Cendio AB for their ThinLinc product).

SeamlessRDP makes it possible to run individual applications rather than a full desktop. In this mode, rdesktop creates a X11 window for each window on the server side. The remote applications can be moved, resized and restacked.

I deal a lot with virtualization in job and have come to be a great fan of VMware’s line of products. Naturally I have been running VMware Workstation on my computer for a very long time but for this particular task it did not fit my needs (most noticeably it does not have the option to run “headless”) so I had to start looking at alternatives.

I started using VMware Server which worked great in version 1.x but after upgrading to 2.0 I was put of by the fact that is now uses a horrible memory hog of a web interface (which could be disabled but one is then dependent on Virtual Infrastructure Client which is Windows only).

After ditching VMware I ended up with two (equally great) products:

Because I use both on a regular basis I will describe how to accomplish the goal using both hypervisors. My guides are based on Ubuntu so you may need to change the commands to match your environment.

One important note: KVM requires hardware virtualization support. To check if your computer supports this, run

The output should be at least 1 – If you know your CPU support VT-x or AMD-v but the above command does not show anything make sure virtualization is enabled in the computer’s BIOS.

KVM is in Ubuntu’s package repository, so installing it easy

Virtualbox does not require hardware virtualization support but will benefit from it.

and then install Virtualbox:

Configuring network on the host#

So, we’ll set up a virtual interface on the host and let the host handle DNS, DHCP and IP forwarding (using dnsmasq and iptables).

Ubuntu tries to keep security really tight so be default only root is allowed to access tun/tap devices. To fix this we create a udev rule to allow group access to those devices

Next create a interface configuration for a tap interface which will spawn a dedicated instance of dnsmasq when the interface is initialized (with Virtualbox it is also possible to use a bridge interface but since it does not work with KVM I will use tap for both) – Add this to /etc/network/interfaces:

test if it works

You also need to add any users running virtual machines to the group uml-net:

In order for the virtual machine to reach the outside network we need to set up IP forwarding; I use Uncomplicated Firewall because it is very simple to use.

Both KVM and Virtualbox support vmdk files so there is no need convert the disk files, just adjust the virtual machine creation to point at the vmdk file instead.

Windows can be quite picky when it comes to hardware so moving a virtual machine to a new hypervisor will most likely result in BSOD. If this happens find a Windows XP install CD, boot from it and repair your Windows XP installation.

Change HD, NIC1MAC, KB and CPU to match your needs.

Last step is to create a virtual disk:

before booting the virtual machine

and connecting to the “console”

We will create the virtual machine from the shell – simply because it is easier.

Boot the virtual machine (this has to be done from the shell to run the “console” as a RDP service):

The installation of Windows XP is no different than any other install so I will not go into that.

Download the driver disc, shut down the virtual Windows machine, change the variable NET to read:

and then boot Windows again

when Windows asks for a driver for the new network interface device, point to the CD-ROM.

Shut down the virtual Windows machine, then from the shell run

Inside Windows, open the CD-ROM drive and select VBoxWindowsAdditions.exe and follow the instructions.

One downside is that someone needs to log on before XP punches a hole in the firewall. To circumvent this either manually add an exception for the RDP service or simply turn of the firewall (that’s what I did since the host will be protected by the host’s firewall as well as the NAT feature of VirtualBox).

One of the more annoying limitations in Windows XP is that the color depth by default is limited to 16 bits. 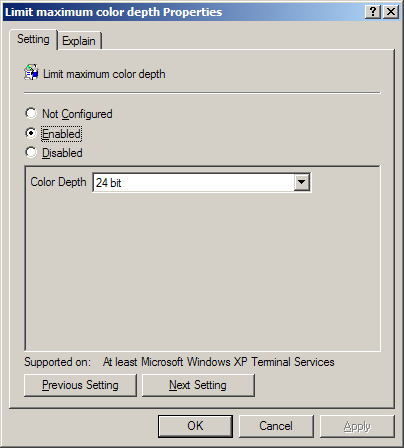 There are a few other parameters one can change, feel free to poke around.

To be able to connect to the Windows machine using RDP you need to set a password for the user you wish connect as.

Assign a static IP to your virtual machine, this will make it easier to create the scripts further down in this article.

The main component in this setup is SeamlessRDP which allows one to launch a single application using RDP (remote desktop) and open only the window of that application. The drawback (with Windows XP) is that you are only allowed to open one session which means you can only launch one application at the same time.

Luckily someone grew tired of this and has made a patch to both rdesktop and SeamlessRDP that makes it possible to launch more than one application over the same SeamlessRDP session.

Download the updated SeamlessRDP program and unpack it to c:\seamlessrdp inside the virtual machine.

Making it all come together#

What this script does it to check for a socket file; if it does not exist rdesktop connects the same way as the standard client. If it does exist rdesktop uses the socket and the existing connection to create another window.

Sharing data between the host and guest#

This is the easiest way of sharing data but it has some drawbacks.

This will make your entire home directory available to your virtual machine but only when you are connected and not with an assigned drive letter. 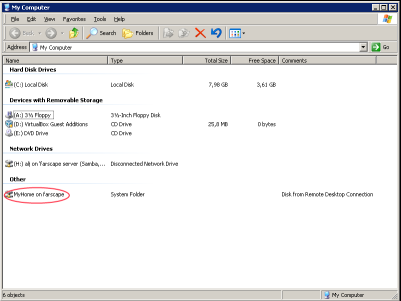 By default the section in /etc/samba/smb.conf concerning home directories is commented out

Be sure to reload the Samba service

Then map the home share inside the virtual machine

The same methods can be used as with KVM but it is a lot smarter to use Shared Folders.

Shut down the virtual machine then run (in a shell on the host):

Inside Windows, run the following command to map the shared folder

If you try to run explorer.exe using the winrun method you will get the entire desktop. This is because the first explorer.exe launched will be always be used as the “shell” (or desktop).

To get around this, download Litestep, install it and set it as the shell for Windows. Now you are able to run explorer.exe and only get the file manager window presented in Linux.

Running any Windows program as a service#

This might come in handy if you need a particular program running (this could be an VPN client needed to access resources from within Windows). In my example I will use the Aventail Connect Client.

Install and configure the program you wish to run as a service. Make sure it works as expected.

Download svcany.zip and unpack in your virtual machine. This example uses C:\srvany

Add a new key (Edit → New → Key) called Parameters and under this new key add a new string called Application with the content C:\Program Files\Aventail\Connect\as32.exe (this string has to match your program).

A comment in one of the old articles asked:

When I run winrun I get this error:

That is because you are using the Open Source Editition (OSE) of Virtualbox which does not have a RDP server build in.